An article from March 22 2017 Science Translational Medicine authored by Manoj Kumar Kanakasabapathy1 et al reports on the development of a combination of smartphone software combined with additional, relatively inexpensive hardware, that can be used to perform a portion of a semen analysis (at home).

Standard semen analysis includes an assessment of sperm concentration, motility (percentage of sperm moving and quality with which they move) and morphology (shape of the sperm).   The new device/software is able to perform an assessment of concentration and motility of the sperm with over a 95% accuracy in terms of whether the specimen does or does not fulfill WHO criteria for a normal specimen (based on only concentration and motility). 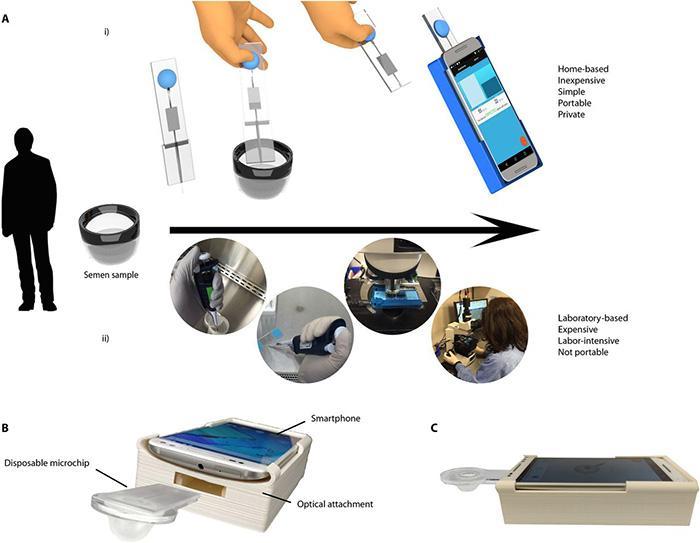 The illustration above is taken directly from the publication. http://stm.sciencemag.org/content/9/382/eaai7863/tab-figures-data

As shown in the attached illustration,  the specimen is loaded into a chamber which uses capillary action to pull it in.  The chamber with specimen is then placed into a plastic cradle which holds it in position.  A smart phone is then placed in the same cradle positioning its camera over the specimen.    The cradle also has an optical attachment to modify the ability of the smartphone to “see” the sperm as well as an LED light source, a battery and a microchip.  The components were reported to cost less than $10.